Plaisance is a French word, meaning ‘pleasantness’ or ‘park’

The Midway Plaisance, known locally as the Midway, is a Chicago public park on the South Side of Chicago, Illinois. It is one mile long by 220 yards wide and extends along 59th and 60th streets, joining Washington Park at its west end and Jackson Park at its east end.

It came to prominence when it hosted amusements at the World’s Columbian Exposition in 1893, lending the name “Midway” to areas at county and state fairs with sideshows. Later designers and artists added (or sought to add) their vision to the Midway. A pet project of the University of Chicago and almost a part of its campus, it has remained essentially a green area. The proximity of the Midway to the University gave the school’s early football teams, the Maroons, a second nickname, “Monsters of the Midway”, a name later applied to the Chicago Bears when the University of Chicago dropped its football program. 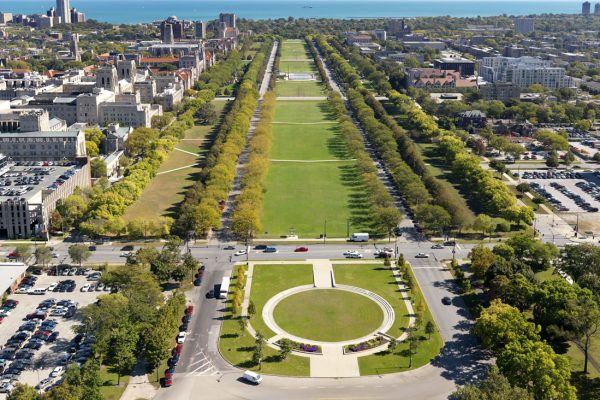